Go Without For Those Without

As you may know, the artist Bill Drummond was in school in October and worked with 400 of our students on his art project 'The 17.'  After working with us, he then went and did the same project at L'Ecole Guillaume Manigat, in Port Au Prince, Haiti.

Despite the desperate poverty they lived in, Bill was bowled over by the intelligence and enthusiasm of the pupils in Haiti and was particularly taken with their desire to know about Kingswood students: what they were like, what they wore, what music they listened to.

Before the earthquake struck, Haiti was a grindingly difficult place to live.  It had a violent history of human evil and misery that it was only just emerging from.  Now with dead bodies rotting in the streets, it is a close to a vision of hell as we are ever likely to see.  Since the terrible earthquake, Bill has been unable to find out any information about the school, which was situated in one of the worst hit areas.

For the next couple of weeks we are asking you to do one thing: instead of speding money on something nice for yourself - a McDonalds, a pair of shoes, a video game, give that money to us to pass on to those who really, desperately need it.  Give what you can afford, little or large.  It WILL help.  Go without for those without to help the students of L'Ecole Guillaume Manigat in the hope we can help them rebuild their education in future.

All donations can be given to form tutors or to Anne and Marie in the finance office.  There will also be people collecting at break times in the halls.

In addition, Bill has set up a Paypal donation site that you may want to contribute to. This is an independent fundraising site specifically for the school and is not linked to any other charity campaign.

If you feel able to in the next couple of weeks, please send any donation you can spare in with your child, or donate by clicking here.

Any and all money, from coppers to notes, will be massively appreciated.  Let's make a difference.

Kingswood students, staff and their families have responded exceptionally well to the request for donations to help the victims of the Haiti earthquake.  As a response to the harrowing images on the news and information passed on in assembly, money came flowing in.

The call to ‘Go Without For Those Without’ was met by many people putting their hand in their pockets and sparing what they could, from a few pence to £50 from one student in Year 7.  The call to donate also led to a sponsored silence in the LRC, led by Mrs Donnachie, attended by 100 students.

At this stage, money is still coming in and we will keep collecting as long as people are willing to donate. We are currently in line to exceed £1000, which is fantastic.

We will keep the money in a fund until we have heard news from L’Ecole Guillaume Manigat about how best to use it.  At present we have heard little news as to their well being, but we will pass on any information we receive.

Thank you all for your generosity. 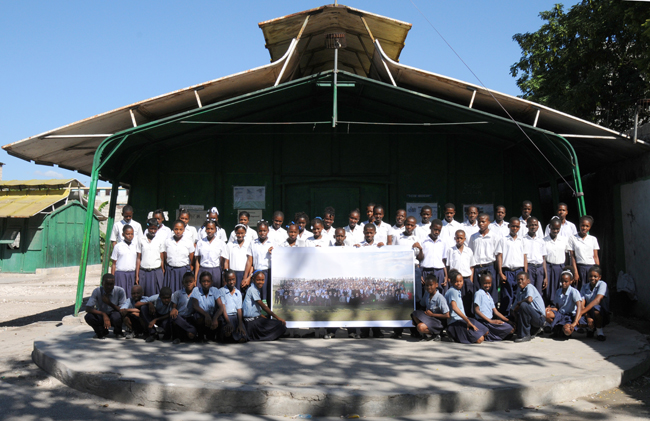 Students in Port Au Prince, Haiti with a photograph of Kingswood students 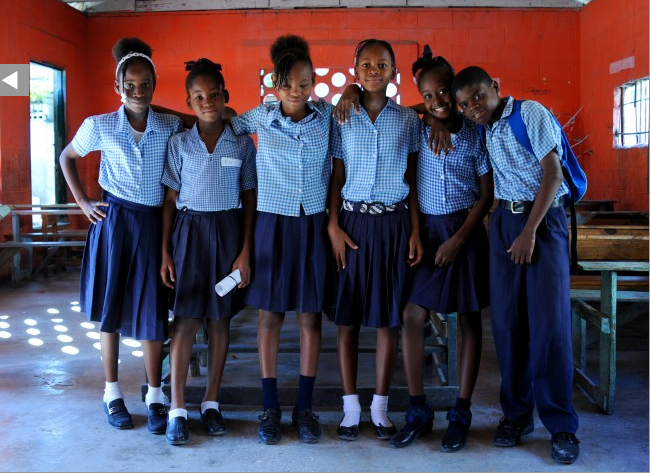